I can show you in images what it looked like, however the smell must be left to your imagination. The stench of urine, mold, and decay was so strong that it became a taste in my mouth.

By the time we arrived, her personal effects were long gone. So, too, were the dozens of cats that had kept her company, although the signs of them were everywhere: the clumps of hair that lined the window sills, the sticky trails down every wall and baseboard, and the feces stuck in the floor grate. The mystery was how this once-grand Victorian home had deteriorated to its current state. Doors were terribly scarred by an animal too big to be a cat. Why had it been so desperate to get out? What happened here? 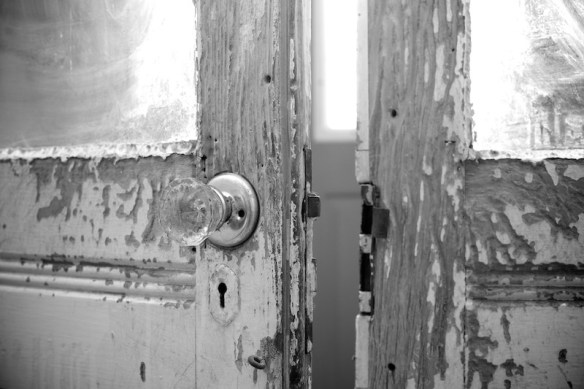 The house was for sale, and I was there to take photographs with Toronto’s most talented real estate agent, Jody McDonnell (www.jodymcdonnell.ca). All we knew was that the elderly owner had recently passed away. It was heartbreaking to think of a ninety-year old woman living alone in these conditions. Although Jody had prepared me for the ugliness we’d encounter, I was surprised by the beauty that still existed in the home’s bones. The architecture, details and hints of what had once been transfixed me. 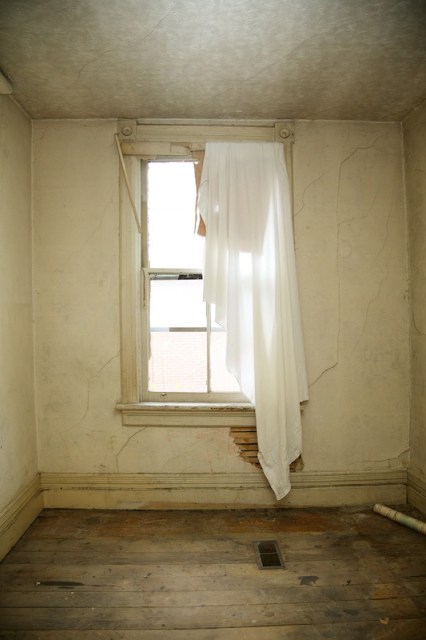 We were thrilled when Jody’s clients triumphed in the bidding war. Only in Toronto could a home in this state of disrepair still command ten offers! The buyers were friends of ours, and they agreed to give me ongoing access to photograph the property. Not only could I shoot the current condition to my heart’s content (who wouldn’t want to lie on urine-soaked floors for hours while holding heavy equipment?), but I would be able to document the entire restoration they had planned. I couldn’t explain it, but I felt an instant connection to the house, and an overwhelming curiosity about who had lived there.

I discovered her name was Isobel, and she’d called this place home since early childhood: first with both her parents, then with just her father, and finally, by herself. An only child who had never married and never had children, Isobel had been an independent working woman with a long, successful career at the CBC, and many personal interests. It hit a little too close to home for me as I wandered through the rooms, feeling as though we had much in common.

Over time, I pieced together more of her story with the help of the listing agent, Isobel’s distant nephew Tom (who was her executor), and the wonderful people at the seniors centre she’d frequented for twenty years. They ran a summer program on Ward’s Island, a sort of “camp for seniors”, and agreed to let me visit on a beautiful July day. I rode the ferry over with a colourful cast of characters, whom I correctly assumed were headed to the same destination.

As Jody and I approached the entrance, a beautiful white cat came running down the path to greet us. How bizarre and appropriate that we were welcomed by him as we arrived to learn about the cat lady. 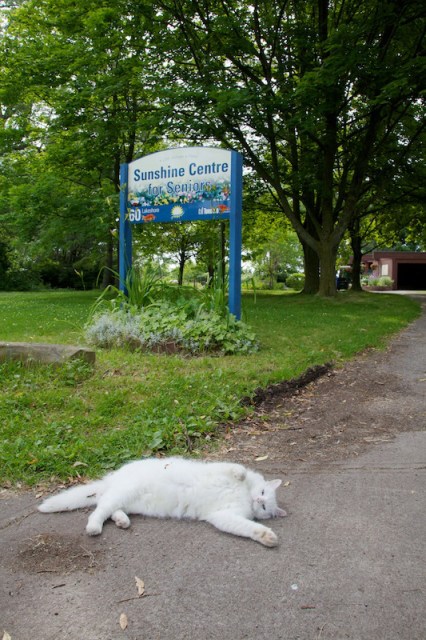 Interestingly enough, the woman who met us at the door said this cat was a famous island resident who had not been seen all season, and had been presumed dead. We felt certain it was Isobel saying hello, or perhaps giving us her blessing.

Within minutes of meeting the director of the centre, she presented me with a photograph, and I finally came face to face with Isobel. There was the octogenarian at a Hawaiian-themed day at the centre, wearing a grass skirt, colourful leis, and a bikini top. Everyone told us how Isobel was full of life, and enthusiastically participated in every event they staged. I couldn’t tear my eyes away from the image, as I tried to reconcile her beaming face with the gloomy environment I’d been photographing. 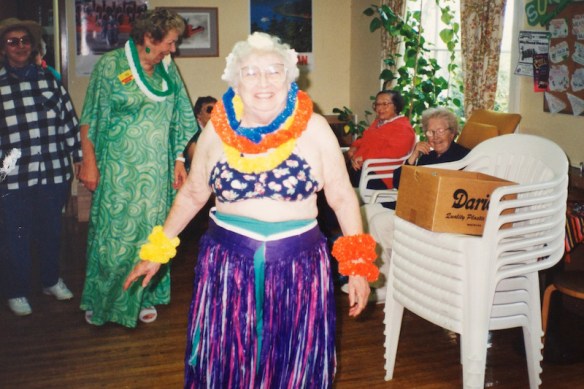 From a private collection, photographer unknown.

Jody and I spent the morning touring the premises, meeting the staff and the “campers”, and learning about Isobel. Despite having a leg amputated in her early 80s, she continued to come to the centre twice a week, as well as organize regular lunch outings with other seniors. Her amputee status never held her back: she installed a lift at her front door, relegated her life to the main floor, and set herself up with an electric wheelchair. Throughout her 80s, Isobel would call Wheel Trans to take her to the ferry, get herself across to the island, and drive her chair to the seniors centre. 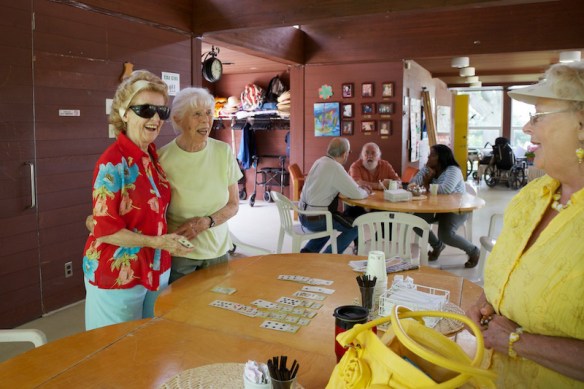 One of the volunteers, a senior herself, told me she had started to feel some time ago that Isobel needed more care at home. She arrived at the centre in cold weather with insufficient clothing, she wasn’t taking care of herself as well, and they weren’t sure she was eating enough. Isobel refused help, and also refused to consider leaving her home for fear of what would happen to her cats. None of her friends could convince her otherwise.

When Jody and I returned to the city, we stopped by the house to check in and share some stories with our friends at the house. They had something to share with us too, after making a most unpleasant (though not unexpected) discovery when they dismantled the deck. 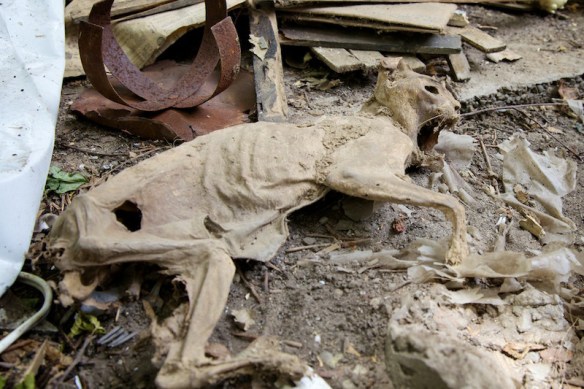 They’d made another interesting, though less macabre, find on the inside of the house as they crowbarred the plaster off the walls: 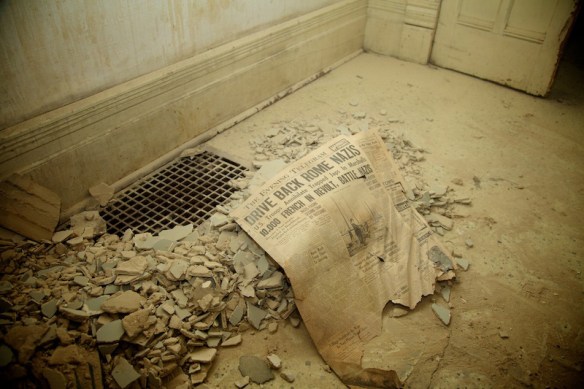 It was another three months before the work was complete, and the transformed house was ready to be put back on the market. Many long days were spent ensuring everything was done properly, beautifully, and with exacting attention to detail. They managed to keep the character of the original home while also building in all the modern conveniences a new owner could want. It was outstanding. 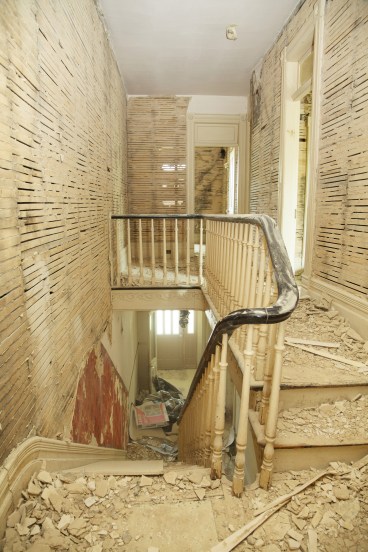 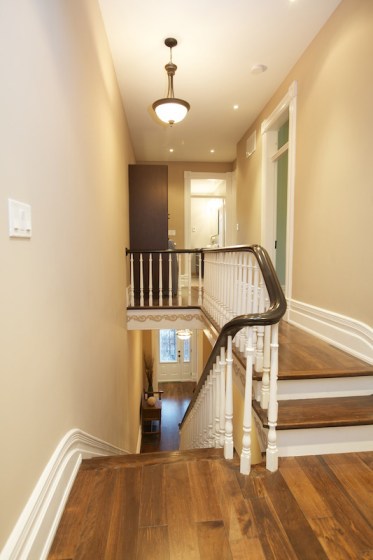 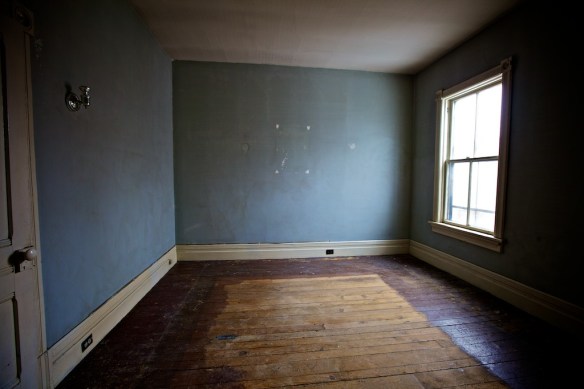 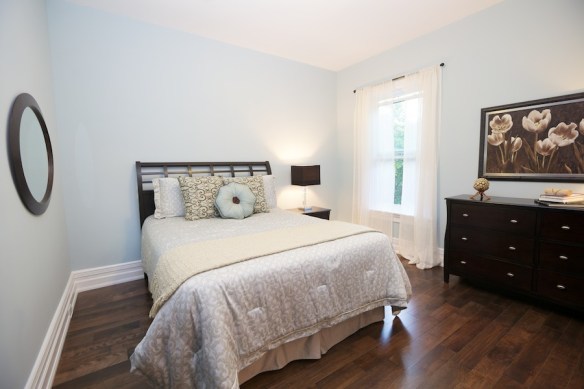 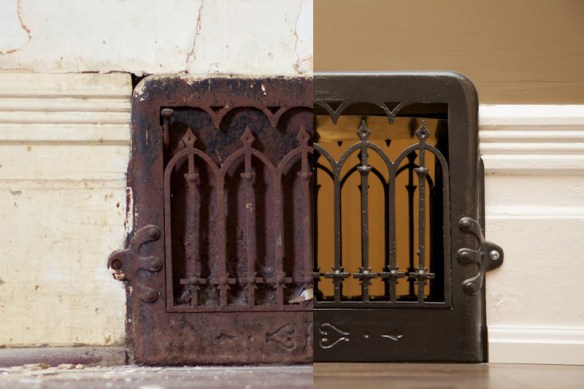 Before and after of renovated Victorian grate. (c) Allyson Scott

The experience that began in the spring was over in the fall.  The house was sold, new owners moved in, and I took a much-needed break to work on other projects.

Months passed, and I finally returned to editing the two thousand images I’d amassed over my time in Isobel’s house. As I immersed myself in the project once again, I had the unshakable feeling that something had been left unfinished. I wanted to pay my respects and say goodbye to this woman I felt I’d come to know, and hoped I could find out where she’d been laid to rest.

I contacted her nephew Tom again, and to my surprise, learned she was actually not yet buried. He lightheartedly joked that Isobel was currently in his basement. She had been cremated, but there were long delays in sorting out her estate. Tom said he’d discovered she already had a family plot available, and he intended to have her ashes buried as soon as the legalities were finalized. I asked the obvious question, yet somehow knew what the answer would be before he gave it. “She’ll be buried in Mt. Pleasant Cemetery.” I know it well:  it is the place I have gone for the last decade to visit my best friend.

I’d been worried that this whole situation would seem a little weird to Tom, but my project and my interest in Isobel’s resting place didn’t seem to faze him a bit. In fact, he proceeded to invite me to join him at the cemetery once her affairs were settled, saying “It will likely just be me, so you’re welcome to come.”

Tom was a man of his word, and contacted me last week to say that the arrangements had been made. I booked the afternoon off work, and picked up some roses for Isobel. 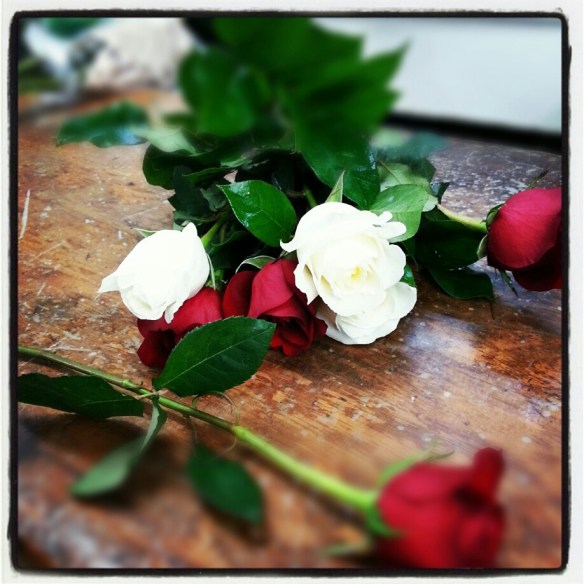 Jody and I met him in the cemetery office, where he arrived with Isobel tucked beneath his arm.  The box within the box was removed and placed on the table, and I was finally able to say hello before saying goodbye. 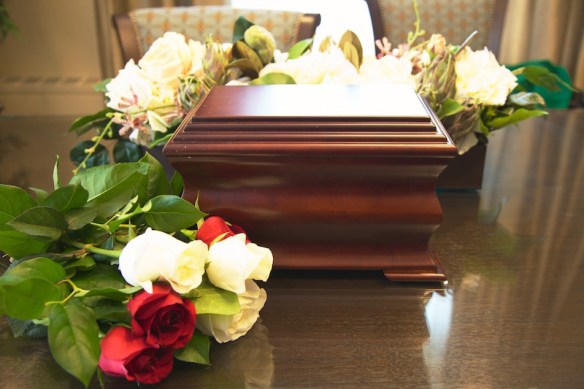 Our motley little group piled into our cars, and followed the cemetery employee to the plot. They’d set up a sign, a carpet, and some astroturf around her burial spot, trying to mark the occasion as best they could. 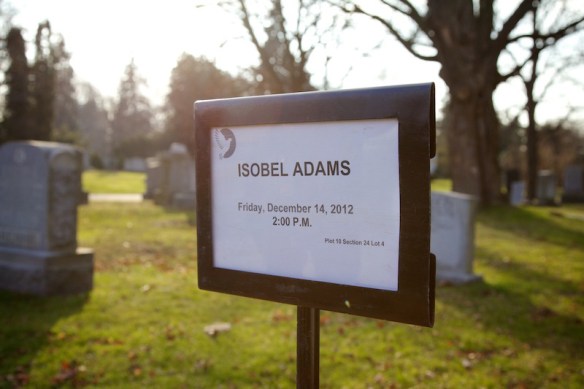 Tom was not a sentimental man. He had not been close to Isobel, despite spending the holidays with her for as long as he could remember, and he explained they had already said their goodbyes at her funeral the year before.  He was kind and personable to us, and I was both shocked and honoured when he asked me to be the one to place her in the ground. 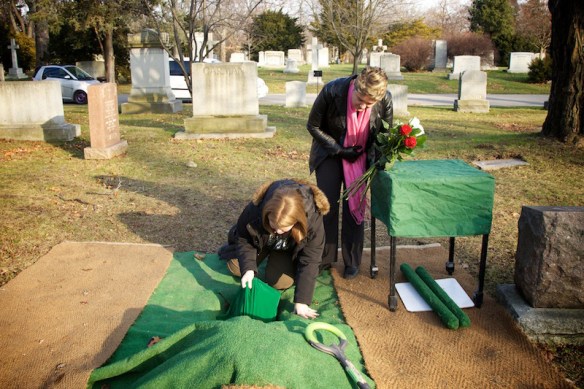 We chatted for a few minutes more, I laid the flowers on Isobel’s family stone (her name was yet to be added), and we said our goodbyes. 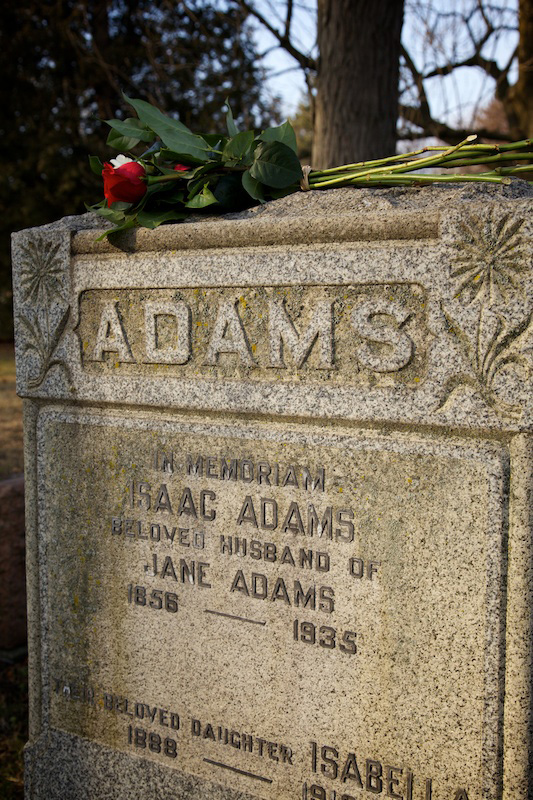 Is this the reward for living a long, yet lonely life?  Having a distant nephew and two strangers lay you to rest?  Ending up alone through circumstances beyond my control is one of my greatest fears.

I know from talking to her personal care worker that Isobel had loved in her lifetime. She had loved, she had regrets, and she went on to live as full a life as she could.

I’m glad we were there to say goodbye.