“I don’t believe in the concept of hell, but if I did, I would think of it as filled with people who were cruel to animals.”

The sister of a friend (a friend once removed, in Facebook land) shared on her profile a blog post from Toronto Animal Services South regarding a dog they had awaiting adoption. His story was heartbreaking: he’d arrived at a Quebec shelter at 2 months old, and more than a year had passed without him being adopted. TAS took him in as a transfer, hoping someone in Ontario would introduce this beautiful dog to life outside a cage.

My wife Jody and I were both suitably distraught, because although we know there are a million similar stories out there, reading a specific profile accompanied by striking photographs takes it from the abstract to the very real. But the shelter blog is aimed at people who might be in the market for a new dog, which, realistically, we were not. We already had two humane society dogs, along with a 19-year old cat who had unwittingly played a key role in getting us our house four years ago (agreeing to write her in as a chattel for the owner who was moving to an apartment surely gave us the winning edge in the bidding war). Sad yet pragmatic, Jody assured me someone would adopt him quickly and told me not to worry.

I lasted until lunchtime the next day. 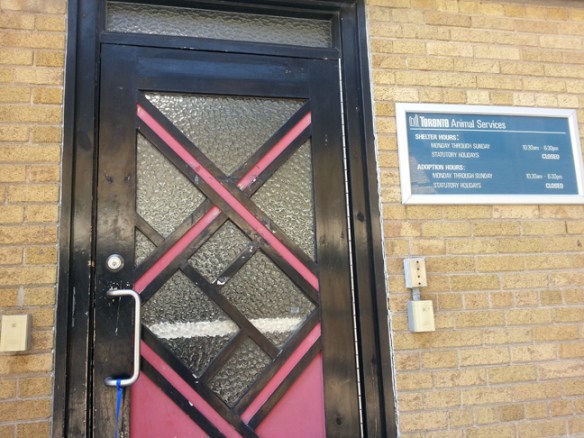 I can’t take credit or responsibility for the decision to go to the shelter; my equally soft-hearted animal-loving friend (sister of the Facebook poster) was the one to say “let’s go check him out” when she heard the story. What harm could there be in simply seeing him for ourselves on a lovely, sunny Friday? 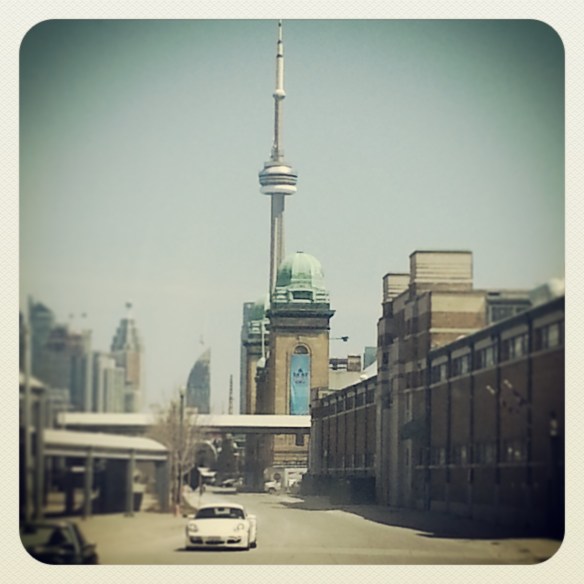 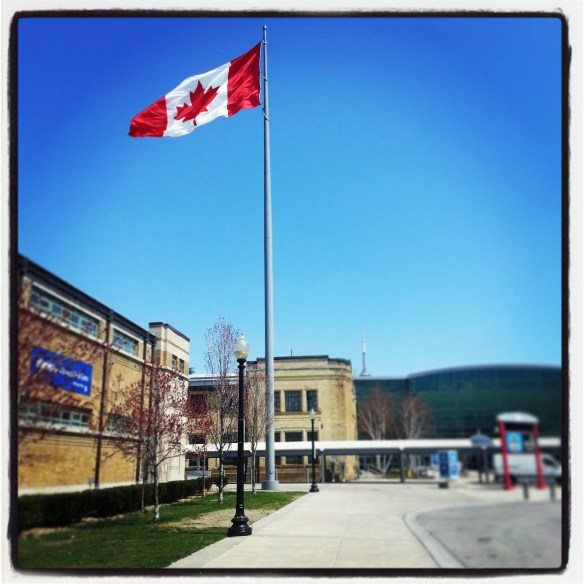 Up some stairs, and down a hall, and around a corner, and through some doors, there is a room filled with rows of cells. They are cold little cement enclosures with a sad blanket and a toy meant to add warmth, but which appear to go ignored.

As the dogs catch sight of us, they clamour against the doors of their enclosures, sticking tongues and paws through the bars, putting on the show that all shelter animals seem compelled to perform. “Pick me!” “Here I am!” 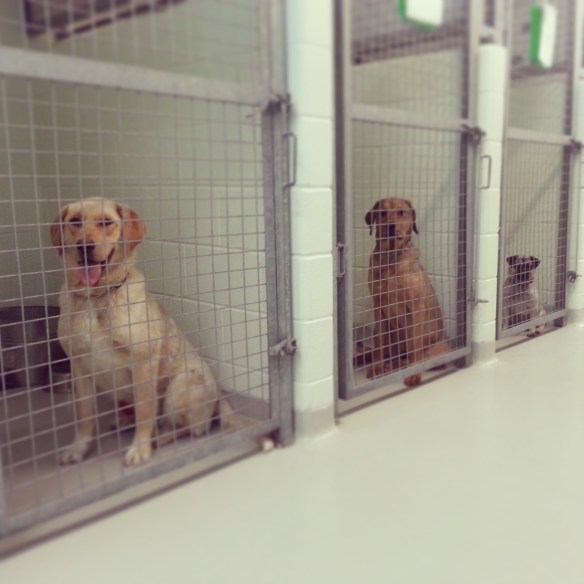 The dog I had come to see, Basquiat, was gone. Adopted that morning, which thrilled and relieved me.

We spent a few minutes interacting with the friendly dogs on display, then I walked around the corner to a row of empty cages. One near the end held a large dog who was pacing and panting. As I approached the door she stopped and looked at me for just a moment, then resumed walking in circles.  She was in constant motion. 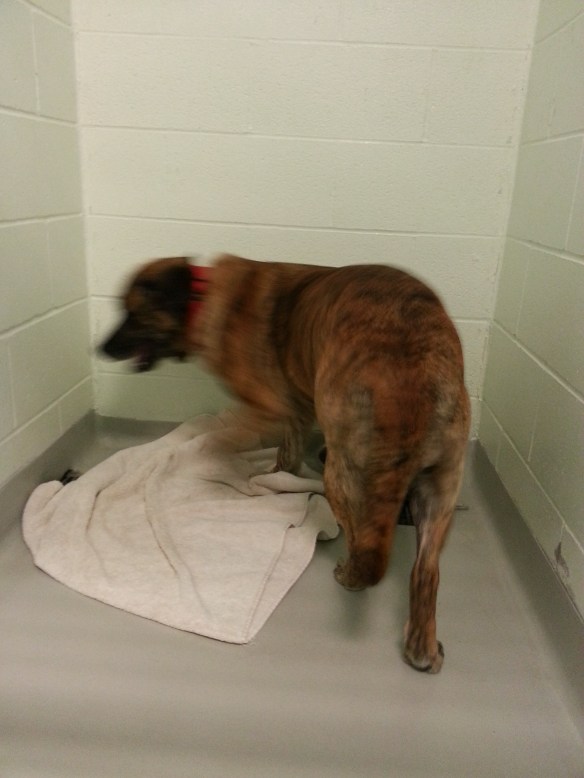 I sat on the floor in front of her cage and watched her pace for a couple of minutes, wondering what this dog had been through to damage her so. As I stood up to leave, she came to the door of the cage and gave my outstretched hand a single lick. Then she turned, and she paced.

That night, I told my wife Jody about our experience at the shelter. I told her something about this lone dog in the corner, set away from the other adoptable dogs, was haunting me. It was no better the next morning. Jody and I ran errands and went about our day, but my thoughts kept returning to the sad dog who’d been circling her cage for a month. We discussed going to visit her together, but I knew if we did I wouldn’t be able to leave her there, and it was more than a little crazy to think of adopting a third shelter dog at this point in our lives.

We finished our running around with our other two dogs in the car, and just when I expected the car to turn right and take us back home, Jody smiled…and turned left.

Mabel was still there, still pacing. We sat on the floor together, and after a few minutes she stopped and faced me. 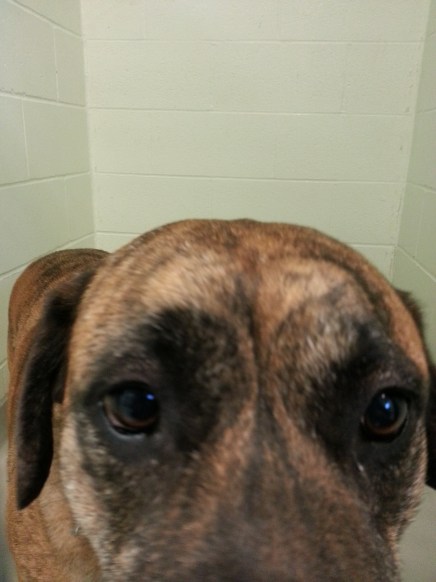 Mabel the mastiff in her shelter cage (c) Allyson Scott

How can I explain that I felt I was looking into the face of an old friend asking me, “What took you so long?”

We found Korey, a wonderful TAS staff member, playing with a Jack Russell in a glass enclosure nearby. She came out to see us and so did the dog, who promptly peed on my foot. These are an excitable bunch of creatures.

Korey returned to Mabel’s cage with us, and when Mabel caught sight of her she stood on her hind legs, panting in excitement, and let out a very soft, very deep, “woof”. Startled, Korey said that was the first time she’d ever heard her voice. I like to think it was because she had something important to say that day. Korey told us she had come from a puppy mill, where she’d been kept in inhumane conditions on an Amish farm and forced to churn out puppies for several years. Her floppy belly and painfully timid demeanour hinted at her long, sad history. Instead of intimidating us, it had the opposite effect, and all we wanted to do was show her a better life.

In the space of half an hour we carefully patted her outside her cage, took her outdoors for a leashed walk, and introduced her to our other two dogs. She passed these tests with flying colours. We filled out forms, paid fees, and Mabel was ours to take home. We gave her a new name for her fresh start, one that two wonderful women in my life had as a middle name.

I rode home in the cargo area of our SUV with her, and she bravely faced the journey with what seemed to be equal parts curiosity and trepidation. 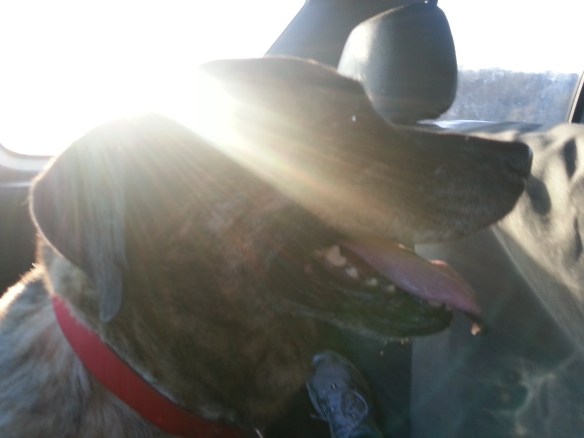 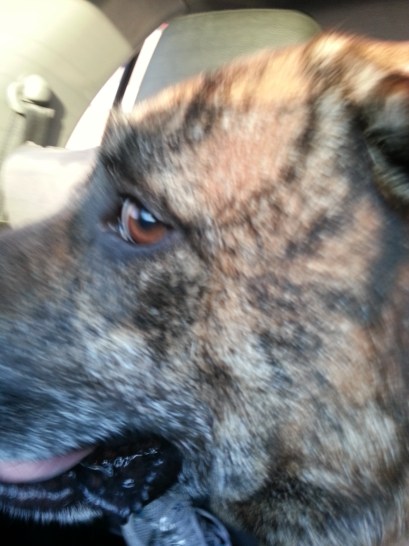 Gracie keeping an eye on me (c) Allyson Scott

She’d never been in a house. Probably hadn’t experienced most of what confronted her when she reached our home. Little sleep was had by all as she paced her way through her first night, and hid in the bushes in our back yard the next day. 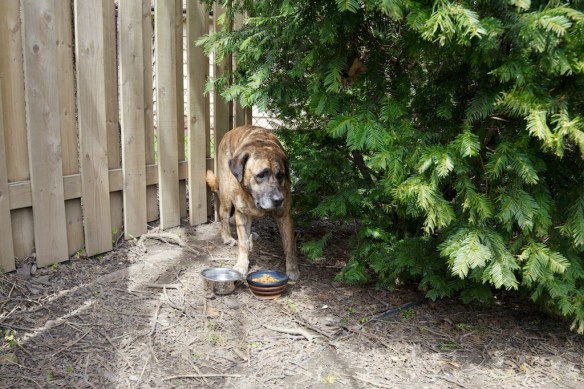 Grace hiding in her new back yard (c) Allyson Scott

We solved the night pacing with the purchase of a new crate, which rarely needed to have its door closed. She just needed a place to feel safe. In the space of two days, she ventured from the bushes to the side of the house to sitting out in the open. As the TAS staff had thought, Grace was learning how to be a dog from watching our other two dogs. She was already ceasing to resemble the creature on the pound dog blog profile we discovered after the fact:

We hired a talented professional trainer, Brandon Steen of The Dog Squad, to help us give her the best, strongest start we could. By the end of the first week, we had a completely different dog in our family. 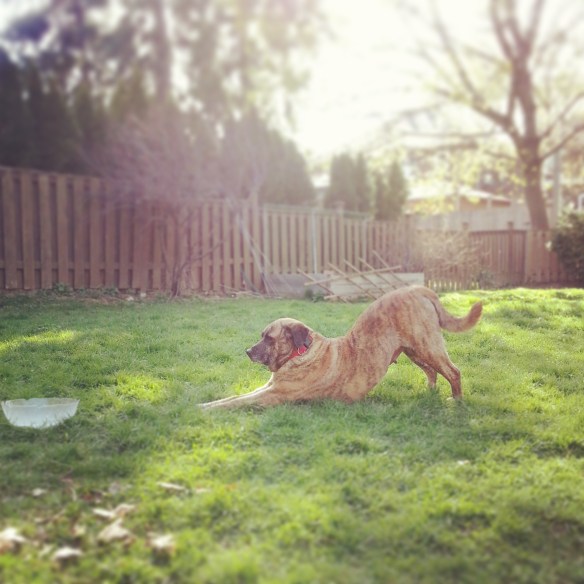 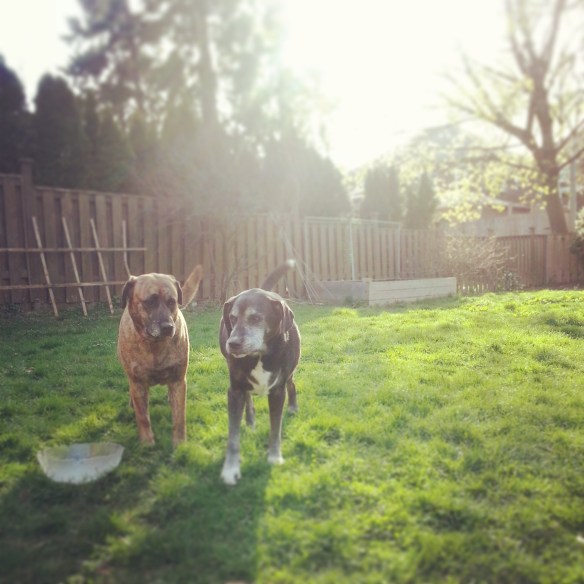 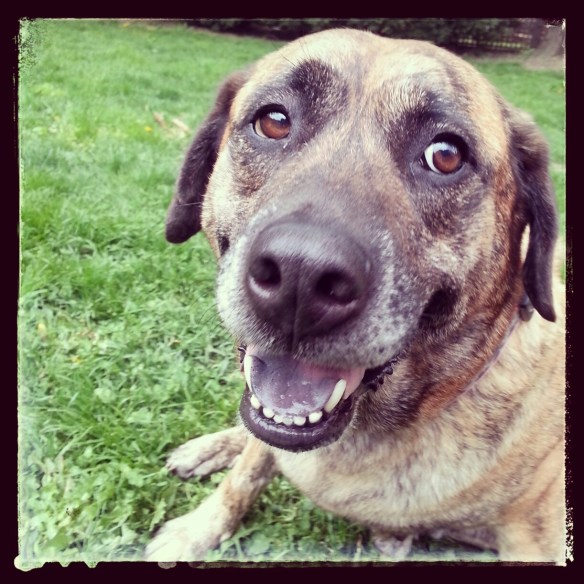 Gracie’s been to the vet, to the beach (yes, she’s a water dog), and to the dog park. She’s learning her basic manners, how to navigate stairs, and how to walk on a leash. She doesn’t cringe at every loud noise anymore, although she still hides from new faces. For her to be as loving and trusting as she is after all she has been through both fills and breaks my heart.

She is, quite simply, amazing. 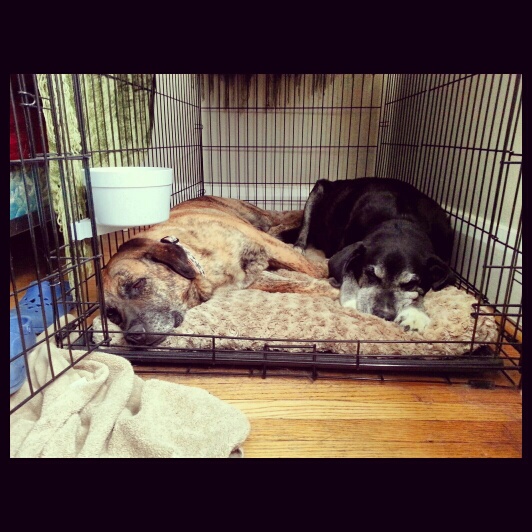