Gracie came to us from Toronto Animal Services, but her adoption from that shelter is a very small part of her story.

Grace is a puppy mill survivor.  She survived thanks to Kimberly Thomas of Kismutt Rescue (www.kismutt.com), a passionate animal rights advocate who continues to pull dogs out of puppy mills, and educate people about the plight of dogs from Ontario’s Amish farms.

On Tuesday, September 4th, Jody and I spent our third wedding anniversary travelling with Grace to the Perth County Court House in Stratford, ON, to support Kim’s efforts. At 10:00 a.m. the court was hearing the case of the Streichers, an Amish couple from Millbank facing animal cruelty charges based on the conditions at their dog farm:  http://www.guelphmercury.com/news-story/2749729-animal-rights-activists-clash-with-amish-dog-kennel-owners-in-perth-co/

This one particular farm, this one particular case, is just the tip of a large iceberg.  The peaceful demonstration outside the court house was intended to publicize the issue as a whole, which is happening right here in Ontario, right now.

If you buy a cute puppy from a pet store, or buy a puppy from a listing on Kijiji (where it is estimated 80% of the dogs originate from puppy mills), you are most likely contributing to a horrible industry Jody and I are just beginning to understand. 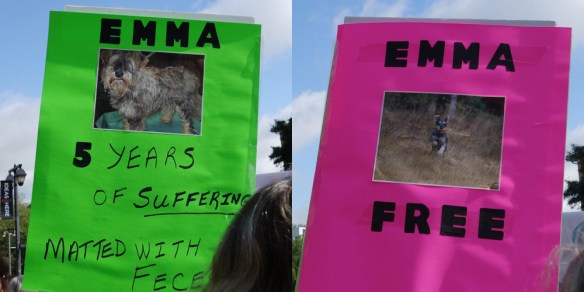 Emma the schnauzer, before and after (c) Allyson Scott 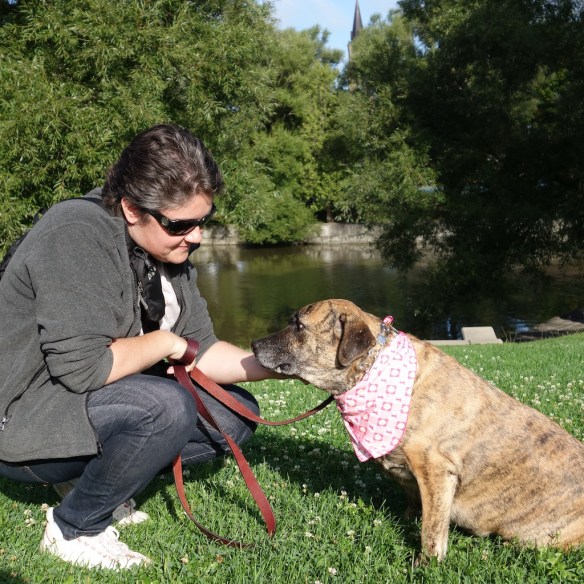 The Streicher case had come to our attention on Facebook, which is fitting because Facebook led us to Gracie.  Kim of Kismutt Rescue posted updates on the long-delayed court appearance, and asked anyone and everyone to attend and demonstrate with her.

We arrived in Stratford shortly after 9, and circled all the doors at the court house to get our bearings.  We were the first ones there, and just hung out in the sunshine waiting for others to arrive. 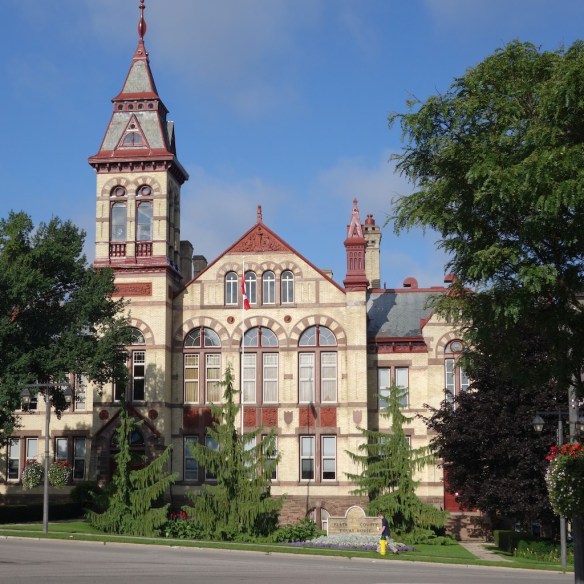 Gradually women began to congregate on the sidewalk; some carrying homemade signs, and many with dogs in tow.  We all introduced ourselves to new arrivals, and found there was a good mix of newbies like us, along with seasoned activists.  Kim had personally rescued several of the dogs in attendance, and owners were anxiously waiting to share stories and thank her, just as we were. 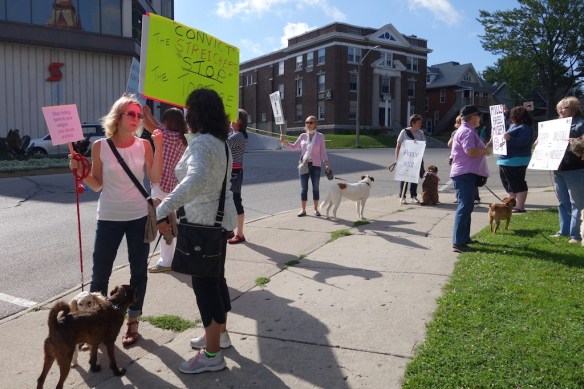 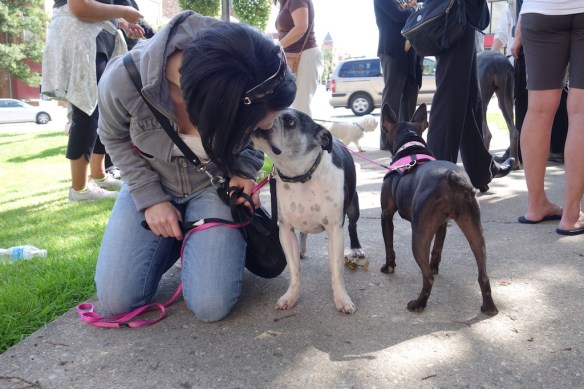 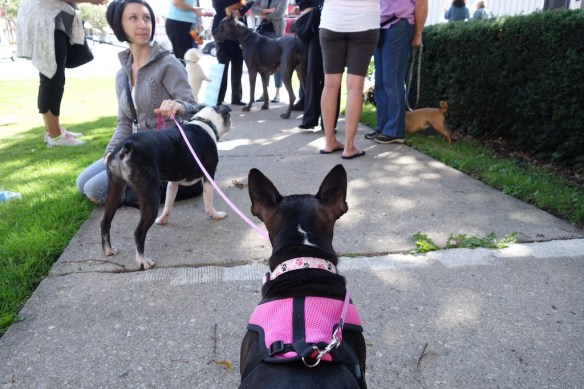 A woman we met named Shannon purchased her older Boston terrier from a pet store 8 years ago, and says the discovery that he came from a puppy mill “is what started her journey” to advocate for the dogs.  Her younger terrier is a mother two years out of her mill life.  She cannot be picked up, because she will lose control of her bladder and bowels in fear.  She has come a long way, but after years of neglect and abuse, she needs love on her terms. 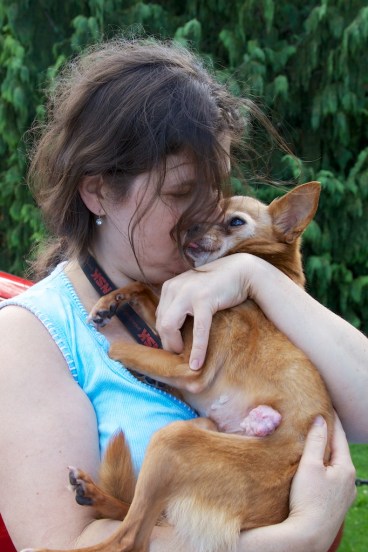 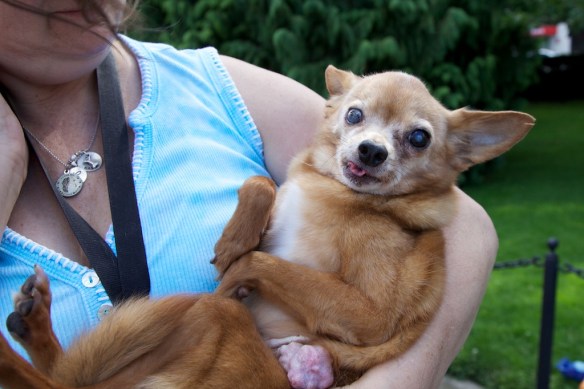 This is Willow.  She was a puppy mill mother.  Now 10, she suffers from dental problems, cancer, and is blind in both eyes.  Amish people do not believe in modern conveniences, and as such there is no heating, no cooling, no ventilation, and no hot water to clean the barns where the animals are kept.  In Willow’s case, a chemical spray cleaner used while she was in her cage burned her right eye, blinding her.  She eventually lost the sight in her left eye due to untreated glaucoma, a common condition in mill dogs.  Pressure builds up behind the eye from fluid that is unable to drain normally, which although easily curable with proper veterinary care, can eventually burst an eye from its socket. 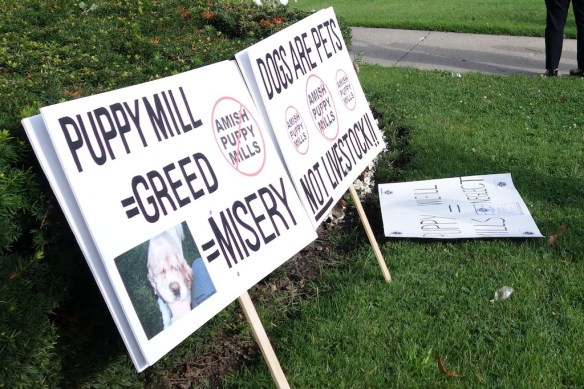 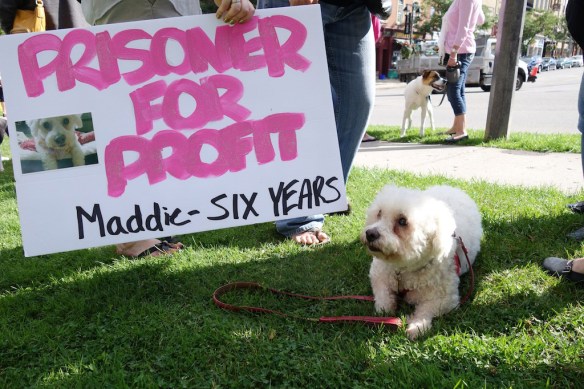 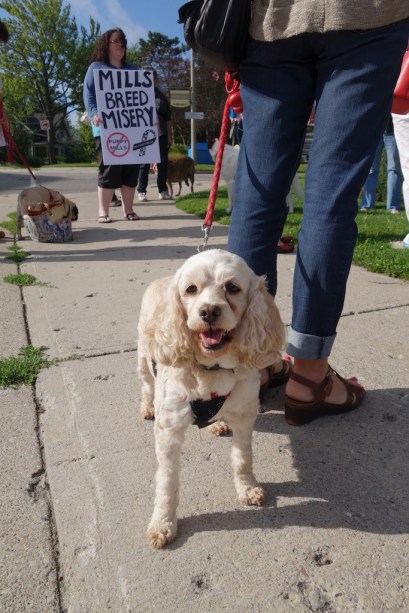 I’d had some concerns about what we might be getting into when we decided to attend the demonstration; whether there would be people yelling at one another and getting heated, but there was none of that.  In fact, not one person showed up from the Amish community, or in support of the Amish farmers.  Passers-by stopped to ask about the signs and the issue, and cars slowed to give supportive honks or waves.  People who best know the facts led many an important discussion, and there was consistent support from everyone who stopped.  What shocked me was the number of people living in the area who knew nothing about the problem.  This was part of the point of being there. 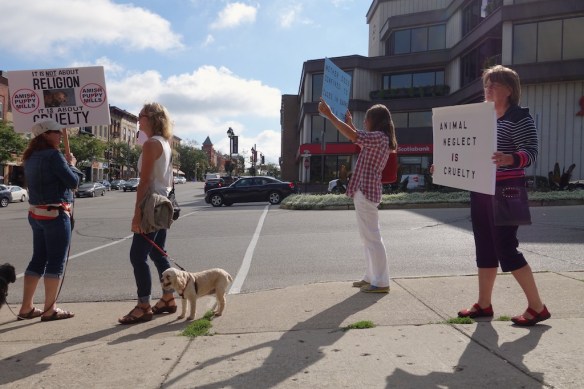 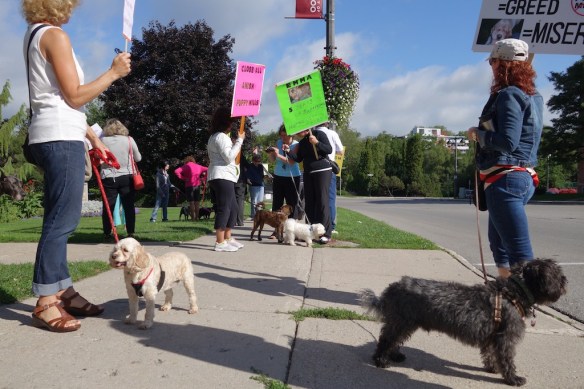 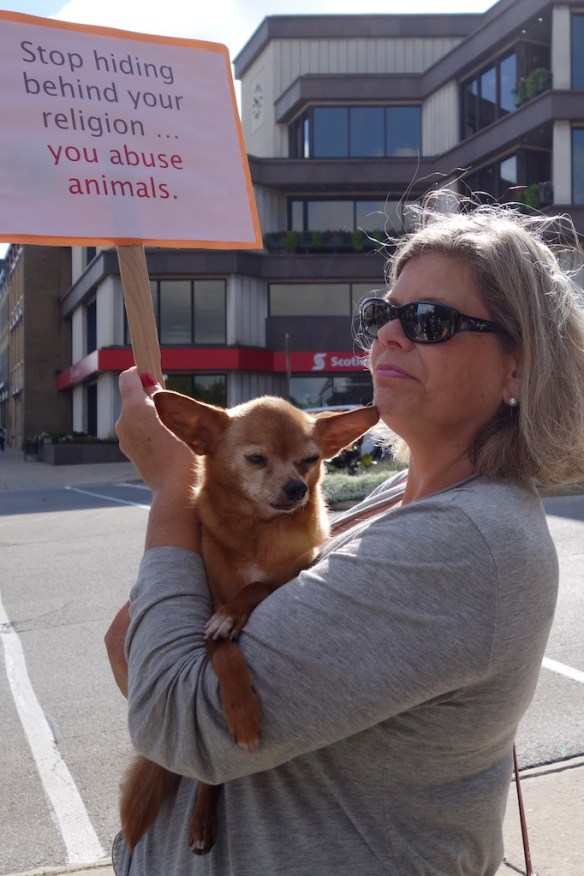 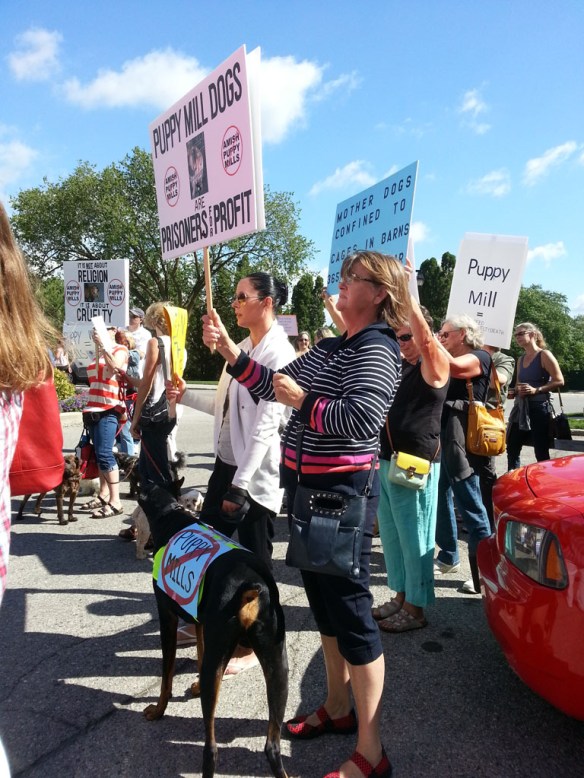 This is a complex issue and I am no expert, but I’ve tried to educate myself a little bit since adopting Gracie.  This means reading and watching disturbing accounts of what the reality is on most Amish dog farms.  There are two main arguments from the Amish perspective:  First, they feel persecuted due to their religious beliefs that don’t allow the use of modern amenities; and secondly, they want to farm dogs as they would any other animal, and not be penalized by those who think dogs “belong on the sofa with us”.  The latter point was argued on some of the signs at the protest – that dogs are “pets, not livestock”.  In truth, I can understand the logic that raising dogs for money is no different from raising other animals.  Are dogs more intelligent beings than chickens?  Most of us would say yes.  Are they smarter than cows?  Maybe.  Than horses?  Than pigs?  I don’t think so.  Other cultures revere different animals the way we do our dogs, and I have a hard time standing behind the argument that dogs are too sentient to be farmed while I sit there enjoying my bacon and eggs.  I try to make the best choices I can when buying meat products, and put my money where my mouth is–particularly after watching the excellent documentary “Food Inc” (available on Netflix).  We can’t change what we don’t know.

If dogs were “farmed” the way most reputable purebred dog breeders run their businesses, with proper veterinary care, appropriate lengths of time between litters, regular exercise, and a healthy living environment, then the farming of dogs to sell healthy puppies would not be protested.  But the point is that due to their religious beliefs and their desire to keep costs down, the Amish farmers are not following any of those rules.  Dogs are kept in crowded and filthy cages/pens 365 days a tear, lie in their own waste, receive no veterinary care, have too many litters, eat the cheapest food available, get no exercise, and often get dehydrated.  These dogs have never touched grass or been able to run, the long-haired breeds are never groomed, and their matted, feces-encrusted hair often causes skin diseases and parasites.  If they get sick, they either die in their pens or are shot by the farmers.

You would think that animal cruelty laws would prevent this, or that the OSPCA would have some jurisdiction over their “kennel” licensing.  The farms receive 2 weeks advance notice before an annual inspection, during which time they can cull their stock of dogs, and make the barn more presentable.  The laws have minimal guidelines that simply mandate the size and cleanliness of the cages and health of the animals; codes which can be met for inspection and then violated the moment the inspector (or the media) leaves – when two or three dogs are jammed into a crate meant for one, and the waste begins to pile up again.

Kim has lots of important information and links on her website, including this one video clip taken inside an Amish dog farm (while it is very sad, it does not include anything so horrifying that you shouldn’t watch it):  http://www.youtube.com/watch?v=TrG28b6RCSU&feature=youtu.be

There were a lot of people, a lot of stories, and a lot of activity for us and Gracie to take in. 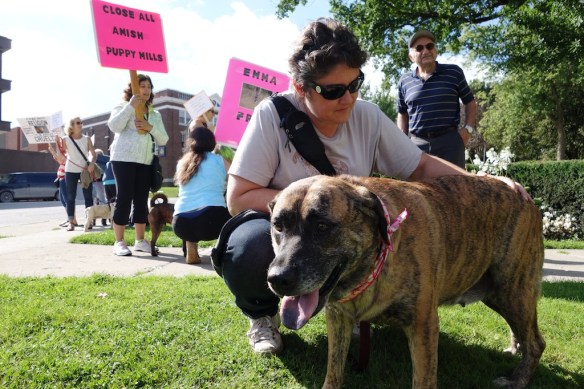 I finally found an opportunity to speak to Kim directly about our dog, and ask her if she had any additional information about Grace’s history.  This had been a burning question over the last four months, though we didn’t know if we could handle the answer.

Kim remembered the farm that Gracie came from (including the owner’s name, which I’m trying to forget), the conditions she was kept in, and why they were about to shoot her (it brings tears to my eyes to simply type those words).  They deemed Gracie a “poor mother”.  She had birthed a litter of 8 pups, but 7 of them had died because she was not producing enough milk.  This was due to obvious dehydration, and Kim said the day she came to take Grace away she was in such poor shape that she couldn’t walk, and had to be carried out.  My heart is breaking at the thought of how many do not get carried out.

Kim informed me that the reason mill dogs can be overweight is due to the extremely poor quality, cheap diet they eat – corn mash.  The same stuff they use to fatten cattle.  That, combined with the fact that these dogs are never, EVER, taken out of their cages for exercise, can make for some heavyset animals which are still terribly malnourished.  I asked about Grace’s scarred (ripped) ear and odd behaviour around food (which is to grab it, then run and hide), and Kim said it was from being kept in a cage with other dogs where she had to compete for her food.  I don’t know what makes her often stop in her tracks and look upwards in total fear, or why every loud noise terrifies her, or why she won’t join us in our basement.  I will only know part of her story, and quite frankly it’s all I can take. After an hour or two, CTV reporters came to interview people and cover the story, which you can hear here: http://london.ctvnews.ca/plea-deal-in-controversial-perth-county-dog-breeding-case-1.1440621

The day ended with a partial victory, since Mrs. Streicher pled guilty to charges against her in exchange for dropping the charges against her husband.  They will only be able to own 2 dogs for the next two years, and will have to suspend their dog breeding business during that time.  Of course, this means they have to dispose of all the dogs currently within their possession, the “how” being entirely up to them.  Make sense to you?  Me neither.

The day ended with a visit from the local police, who arrived in three squad cars.  Someone had called them from within the court house, saying the Streichers felt they required protection.  This is hilarious, given that their only interaction with us was to drive by in a car.  The police said they had to respond, but knew we were behaving responsibly.  They basically played with the dogs and left. 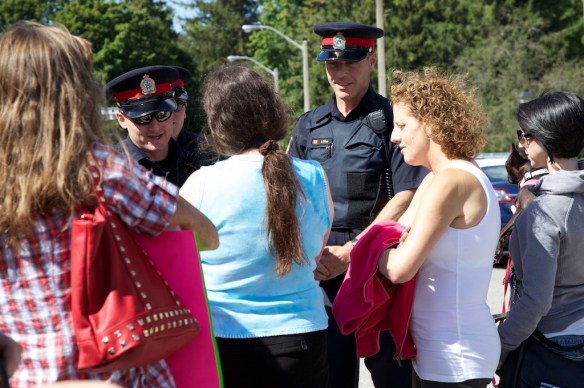 The message repeated over and over on this day was that if no one bought mill puppies, the industry would cease to exist.  People need to know where their new puppy is coming from, and should ask to meet both the breeding parents.  If that is not possible, or they feel anything at all is strange about the transaction, they should not buy the dog.

If you’re wondering what you can do to help, there are many ways to lend your support.  If you are able to make a financial donation, you can help Kimberly’s rescue efforts through her website using PayPal (under Our Wish List), or directly to her vet clinic in St. Marys.  If you are able to provide a home to an animal in need, please consider contacting Kim to review available dogs.  There is also a long list of ongoing needs for supplies on her website.

Gracie is still making progress on a daily basis, gaining confidence and learning to trust her new world.  She is easily scared and obviously has some emotional scars, but she is a wonderful dog without an aggressive bone in her body.  I can’t imagine our household without her, and I wish more people would consider a “rescue” dog (a very appropriate term in this case) in need over a purebred dog.  These beautiful dogs deserve the opportunity to know happiness and freedom. 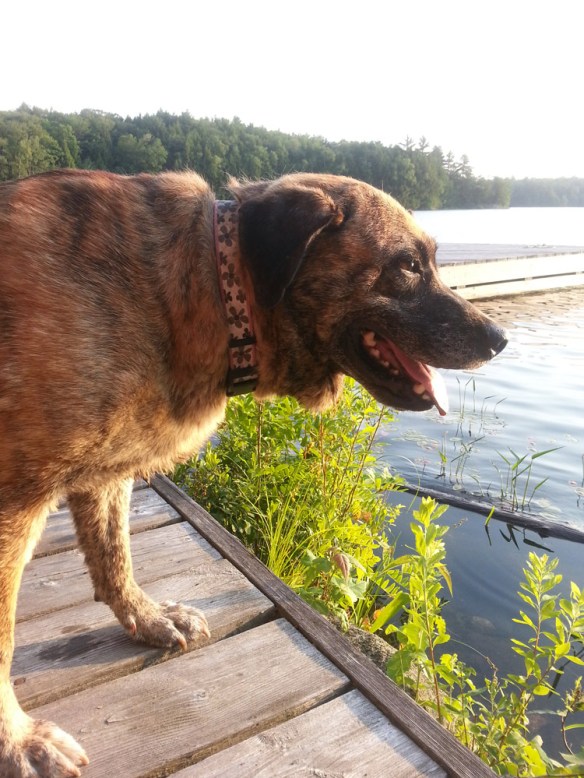