The cold had a real bite to it today, but Torontonians were too angry to stay home.

I arrived early, and funnily enough one of the first people I saw was a former coworker of mine named Mark, holding the great sign above.  We had a brief chat to commiserate about the ridiculousness of the situation, and how long the laundry list of offences had to get before Canadians would say “enough is enough”.  Some people managed to maintain a sense of humour to offset their anger: 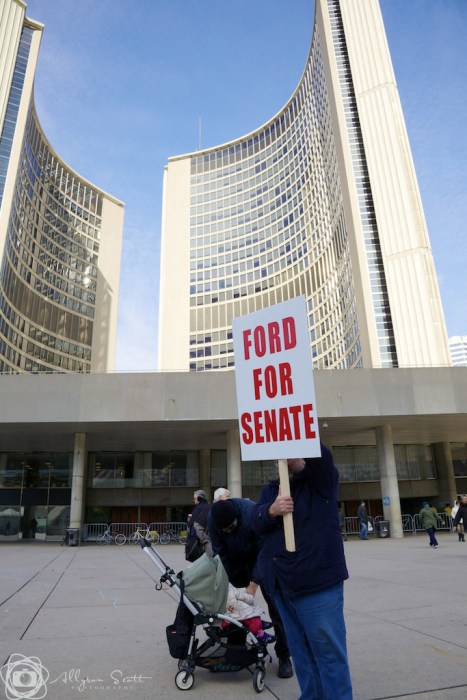 The crowd was sparse at first, and I feared people wouldn’t be able to make it to the protest on a work day, but within minutes they were pouring into the square on their lunch hours.  There was no mistaking the overriding sentiment. 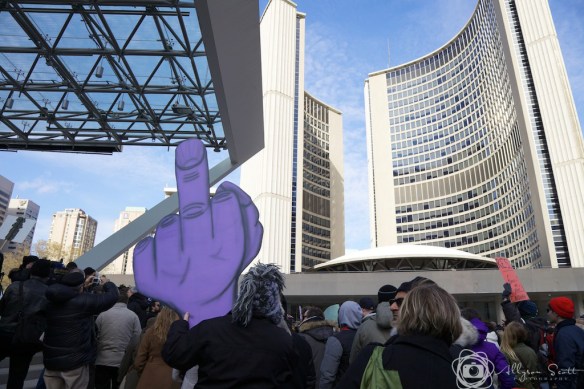 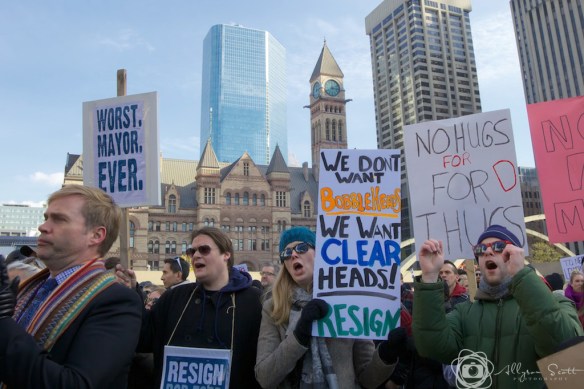 If you’ve been avoiding the oversupply of Rob Ford news and don’t get the “bobblehead” reference on the signage, our mayor had 1,000 of them custom made in his own corpulent likeness, and signed them all yesterday in the lobby.  Proceeds went to the United Way – and no doubt the event had been planned long in advance of recent revelations – but his jovial behaviour offended many who feel he hasn’t taken the multitude of complaints about him seriously.

Individuals took turns at the bullhorn, rehashing just a few of the mayor’s well-known transgressions while in office.  With so many specific, documented instances of egregious behaviour and offensive statements (including homophobic and racist slurs), it is impossible to understand how anyone would want Rob Ford to stay on as mayor. 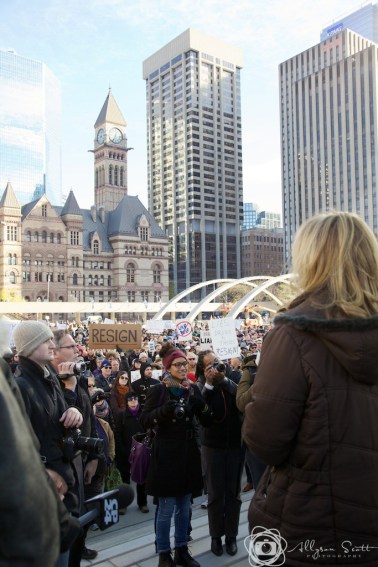 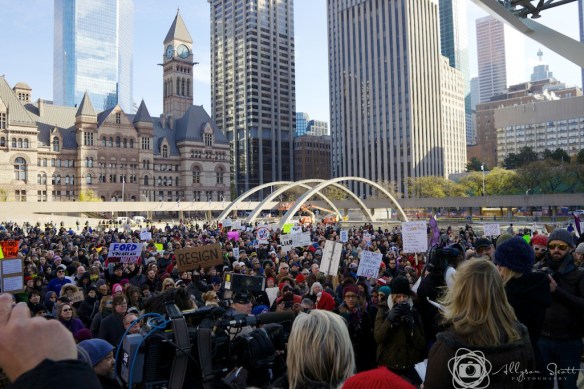 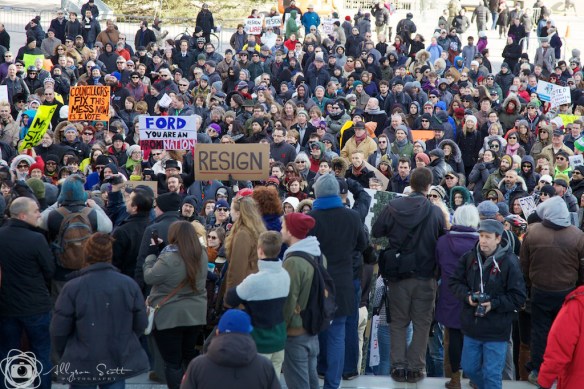 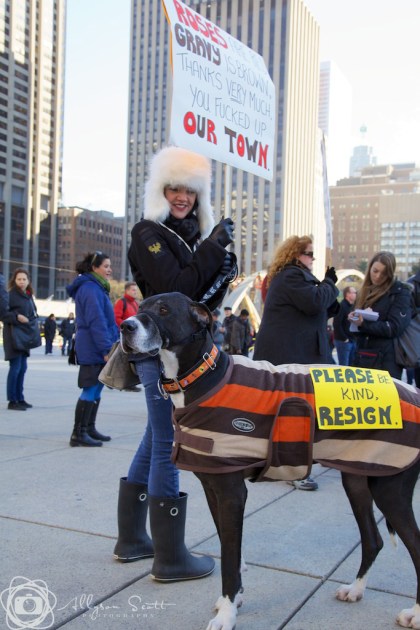 Piles of colourful chalk lay on the stairs behind the podium, and many people stopped to scrawl messages for Rob Ford. 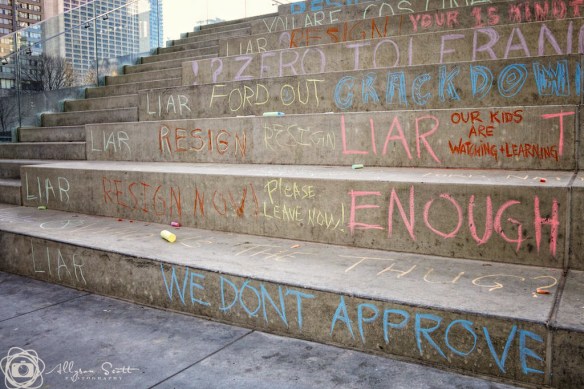 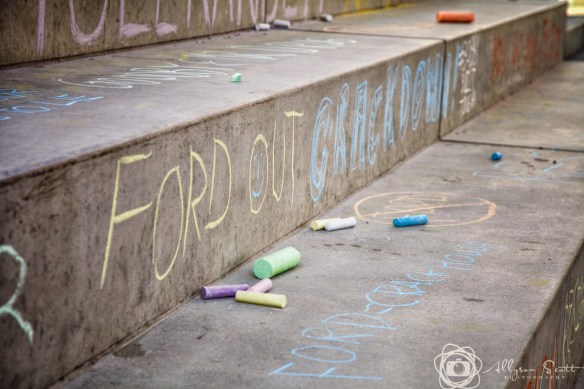 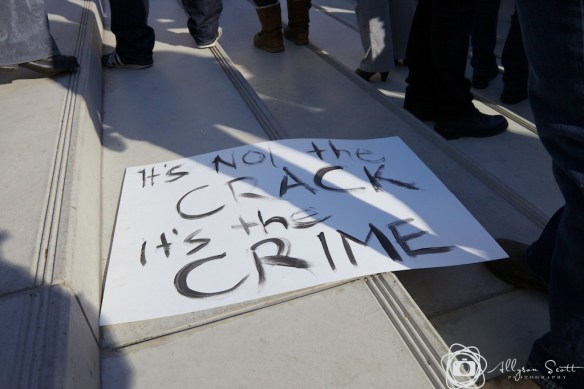 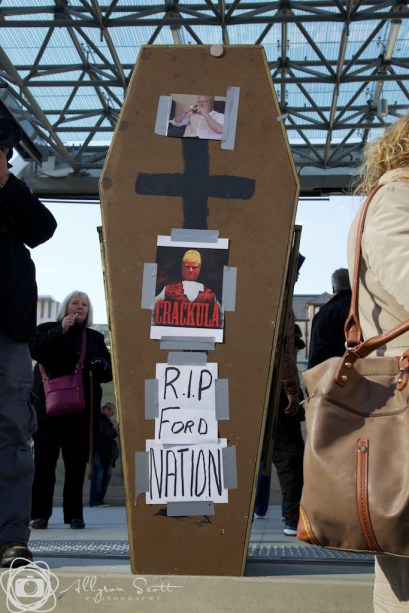 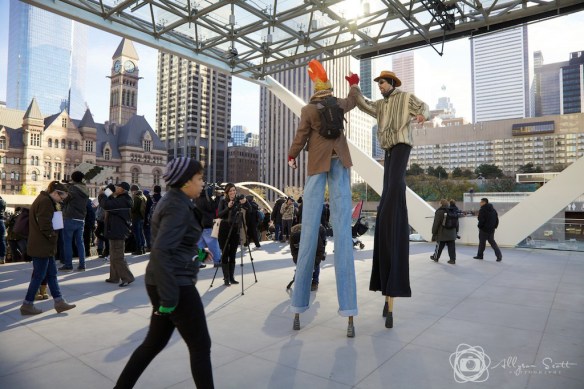 Once the speakers were finished, protesters made their way en masse to the doors of City Hall, chanting to the beat of snare drums, “Hey hey!  Ho ho!  Rob Ford has got to go!”

City Council was in session during all this, debating and voting on a motion recommending that Rob Ford take a leave of absence.  His smug, arrogant attitude of invincibility was on display even as the councillors debated his fitness for his position, and he physically blocked and intimidated the man who had put forth the motion. 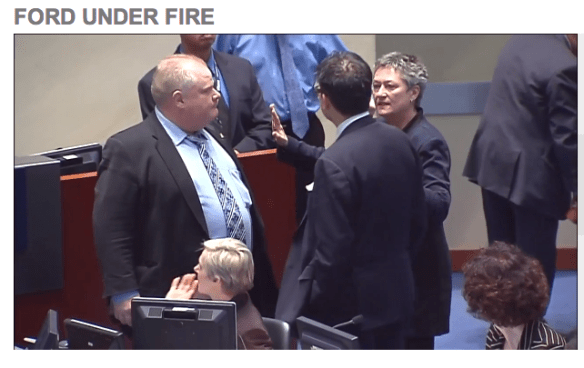 Even the landslide vote in favour of that motion (37-5) has no real effect, other than to show Rob Ford he has far more detractors than supporters.  New information about his job performance is being released daily, but he continues to refer back to his insincere blanket apology with each revelation.  “I’ve already apologized, there’s nothing else I can say.”  If pressed, he becomes indignant and defensive, never contrite: “Well maybe you’re perfect, but I’m not.” 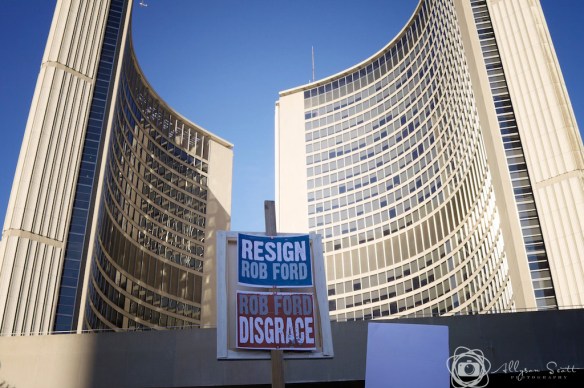