New York’s been in the news a little more than usual lately, what with their new mayor finding his snow legs (we can only dream of such minor squabbles over snow removal here in Toronto), and Jimmy Fallon about to move The Tonight Show back to its 30 Rock roots next month.  It’s made me nostalgic for the one and only whirlwind experience I had in the city, which may not have been an ideal approach, but gave me a taste of the Big Apple.

I flew down to New York in March 2005 on business, to art direct a one-day photo shoot. A tight expense report allowance dictated the cheapest accommodation possible, a blessing in the end because I could afford to add a couple of personal days on my own dime.  I was single at the time, and my mother was happy to join me and make it a girls weekend. That’s my mom in a nutshell – game for anything!

Little did she know what she’d gotten herself into. 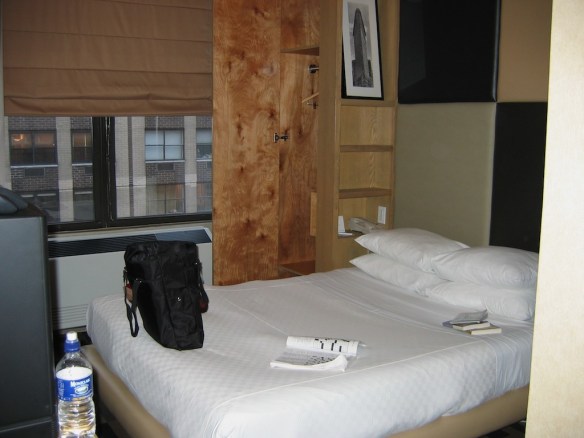 That’s our hotel room.  The whole thing.  A bed, a television, a tiny bathroom on the right, and an expansive view of…another building.  No chair, not even a closet – just the skinny armoire beside the bed.  Best of all, the rickety elevator was broken for the duration of our stay, so we had the New York equivalent of a European walk-up.

Mom entertained herself during my evening meeting with the photographer and long next day on set; then she and I had two full days to ourselves.  We hit the ground running, agreeing that despite the bracing cold, the best way to experience a new city is on foot. The weather and short amount of time led to my decision to rely on a small digital point and shoot camera for our sightseeing, a choice I still regret.

We hoofed it from 24th and 3rd all the way south to the Brooklyn Bridge.  Because what else would you do in that extreme cold but walk across the bridge to Brooklyn and back, exposed to the icy wind? 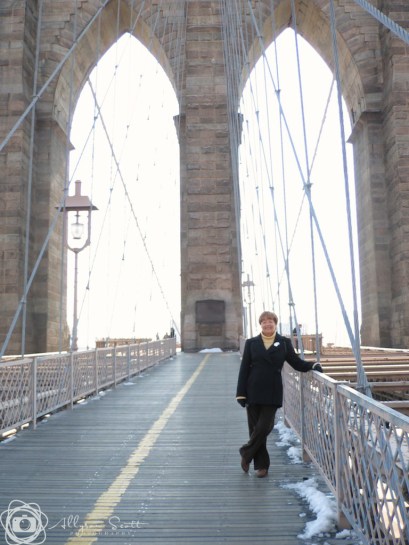 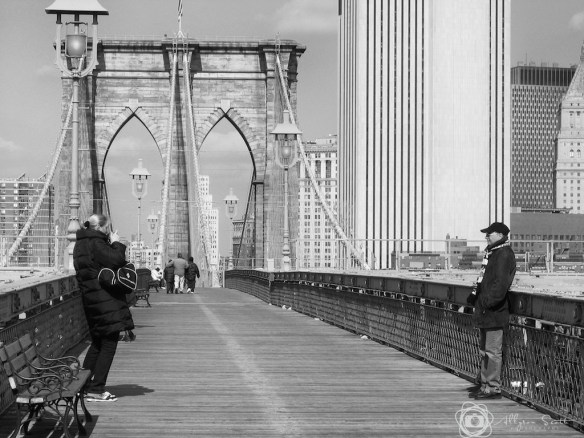 My favourite stop on our brief tour of Brooklyn?  The kitchen store called Fishs Eddy (http://www.fishseddy.com/).  Despite wanting to buy an entire new set of dishes, I had to settle for dish towels that were lighter to carry.  Back in Manhattan, we warmed up with coffee and a bite to eat while getting our bearings on the map. 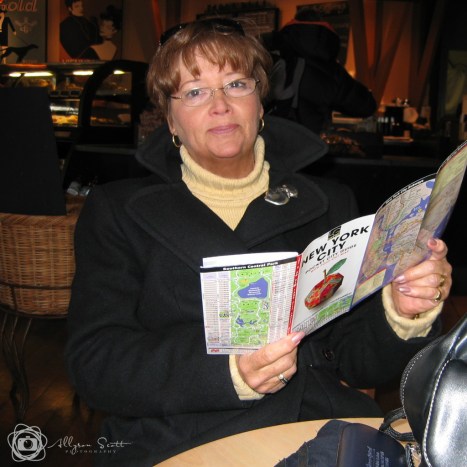 As upsetting as I knew it would be, I needed us to make our way over to Ground Zero.  It was gruesome in an unexpected way, as we had to pass several tables with people hawking souvenirs.  Twin Tower statues with gaudy rainbows, postcards with shocking photos, and rocks that claimed to be recovered from the site were just a few of the souvenirs on display.  Some of the sellers were shouting at passers-by, waving their terrorism-themed wares and claiming the money would help a variety of victims’ funds.  I don’t know which made me sicker: that spectacle, or the sight of the gaping wound where the towers stood. 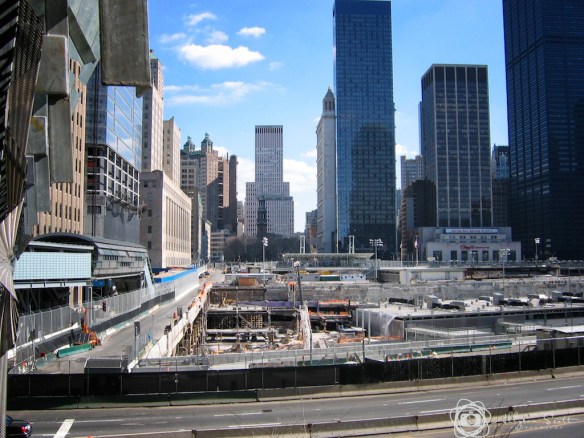 It’s just not possible to put into words what it was like to stand there in person after seeing those unforgettable events unfold on television.  The scale was so much greater than I could have imagined, and as unseemly as it was to be one of the gawkers, I just had to experience it for myself.  Had to put my condolences out there with the millions of others.

Across the street stands St. Paul’s Chapel, where for months after 9/11, recovery workers could find assistance from hundreds of volunteers working around the clock.  The memorials and exhibits in the church are incredibly moving, but it didn’t seem appropriate to take photos inside. 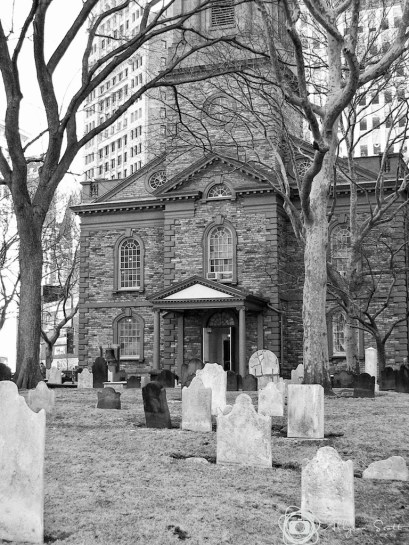 In nearby Battery Park, we came upon a massive sculpture that appeared misshapen. The plaque beside it explained that it stood in the plaza of the WTC for thirty years, and was damaged in the 9/11 attacks.  What a perfect idea to install it elsewhere in the city to stand as a memorial to what happened. 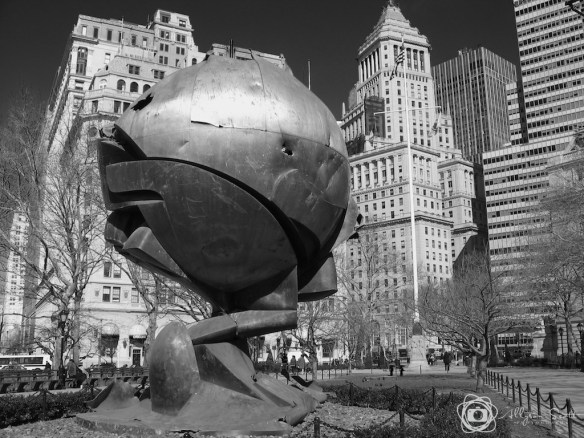 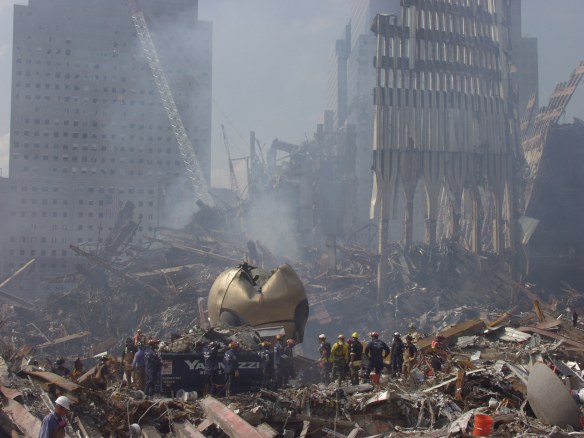 It was a lot of emotion for an afternoon, and the walk back to the hotel seemed much longer.

We met some interesting characters along the way, including this vendor on Wall Street who was only too happy to pose for a photo.  New Yorkers surprised me with their friendliness toward obvious tourists, often shouting, “Hey!  Take my picture!” while photobombing my shot.  I loved it. 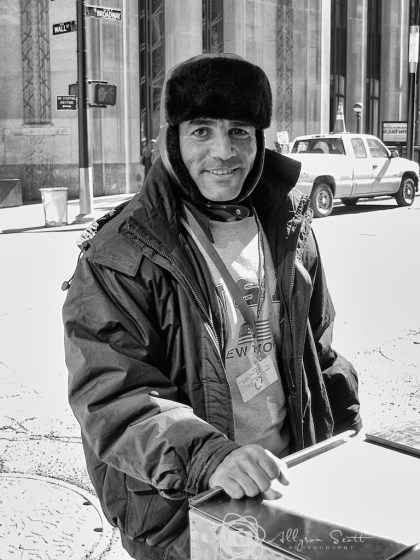 Even the graffiti-coated doorways made for interesting subject matter; there was inspiration to be found on every corner. 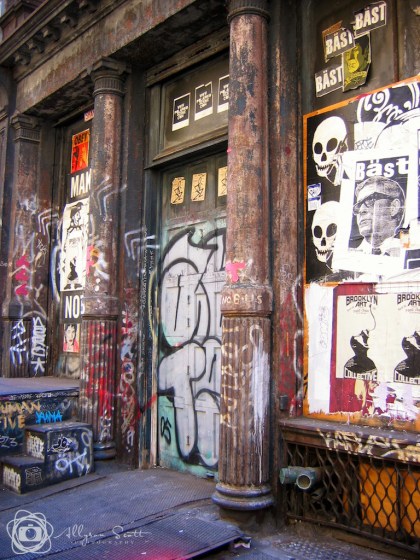 That night, Mom and I decided to try our luck at getting rush seats to a new musical on Broadway at the time called “Spamalot”.  Despite getting there early and standing in line for a very long time, there were no tickets to be had.  We’d gotten to chatting with the two people next to us, making the best of the wait, so when we all came up empty-handed for the show, the four of us decided to grab a drink together to warm up.  At the bar, the woman asked us if we had dinner plans, which we did not.  With a sneaky laugh, she told us she’d made reservations at two fabulous restaurants, unsure of which food she’d feel like, and we were welcome to use the reservation she didn’t want.  We soon found ourselves sharing a cab with these funny and friendly people on our way to Tao…and discovered that the woman’s name was Julie Oreck, of Oreck vacuum cleaners!  We were hanging out with an honest to goodness heiress/philanthropist, who also happened to be a lovely person.  Only in New York!  We hopped out at Tao and waved goodbye, then enjoyed one of the best meals I’ve ever had.  I think our night beat the hell out of Spamalot!

Over the next day and a half, we walked a northern path to Grand Central Station, MOMA (where I stood within touching distance of Starry Night, but managed to resist putting a finger on it), Central Park, lunched at Tavern On The Green, and went up the Empire State Building.  We sampled as much of the city as I think a person possibly could in such a short time. 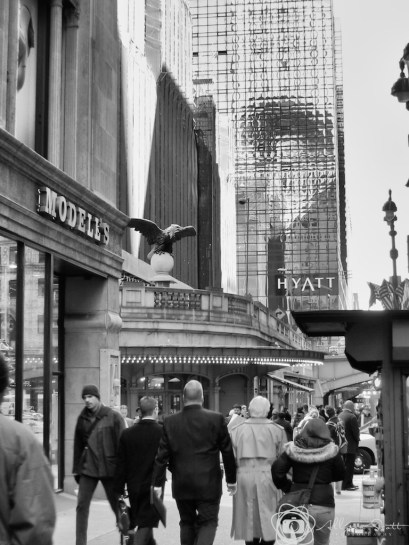 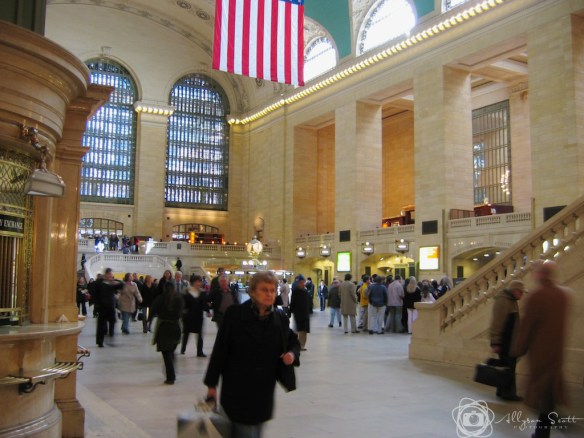 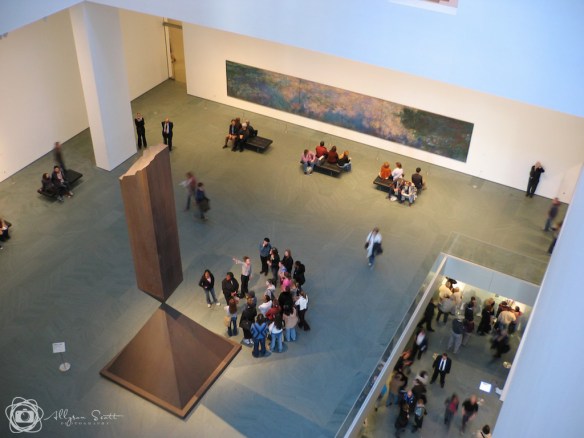 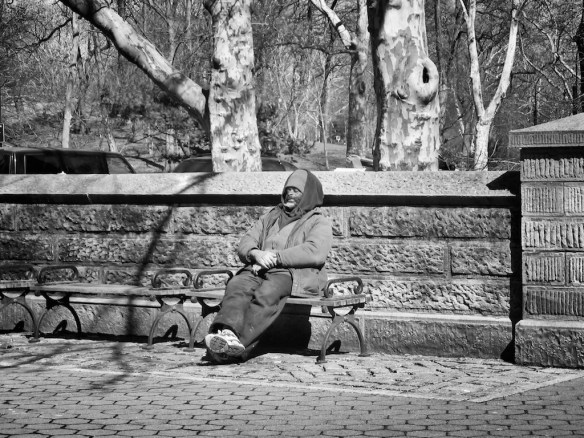 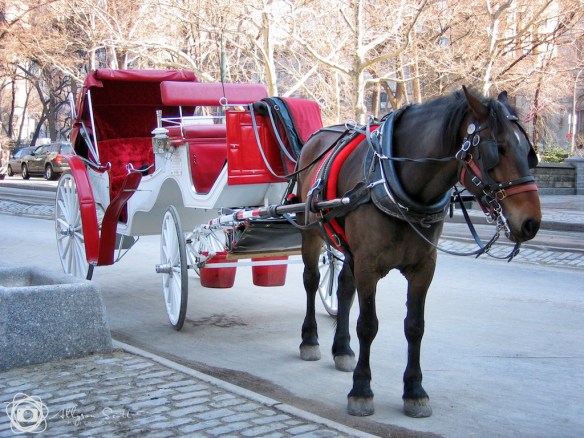 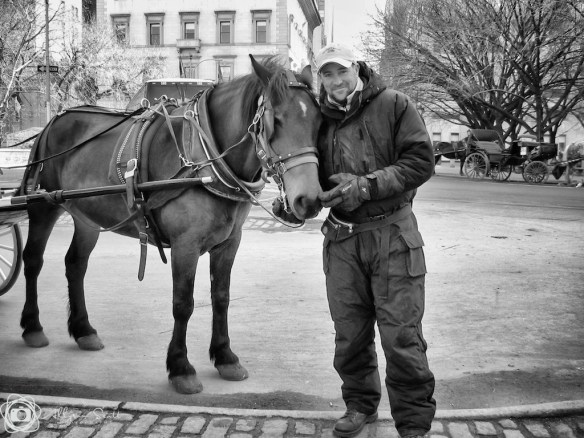 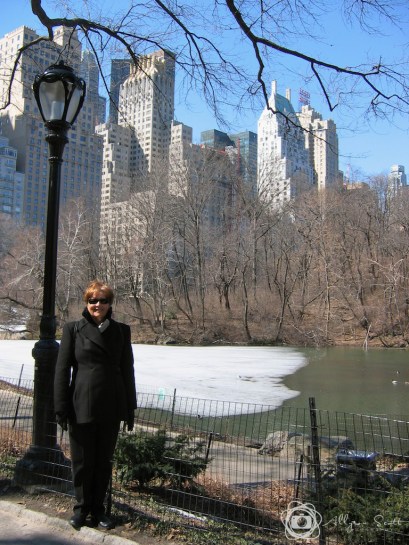 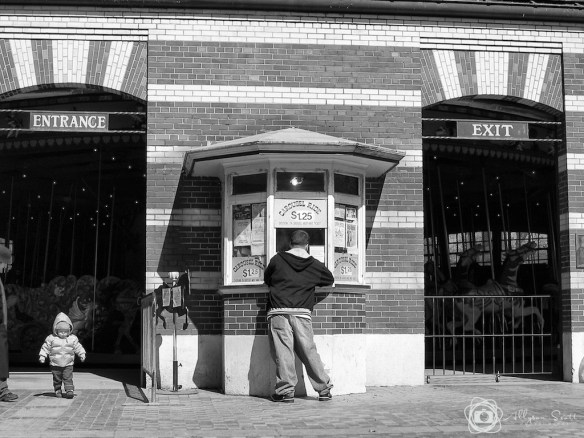 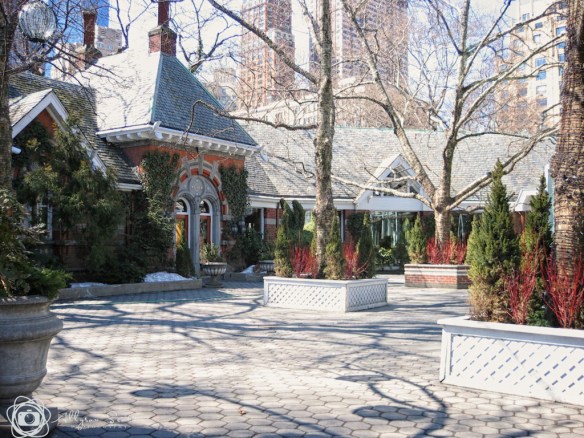 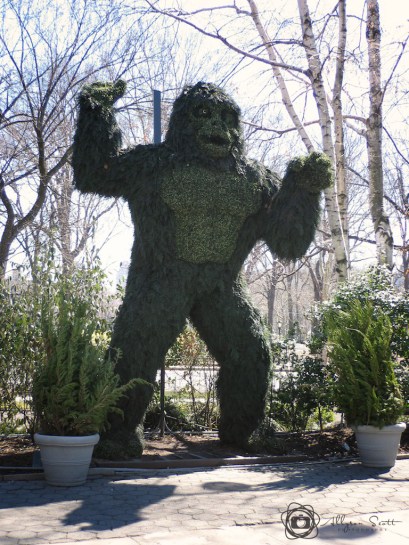 Topiary at Tavern On The Green (c) Allyson Scott 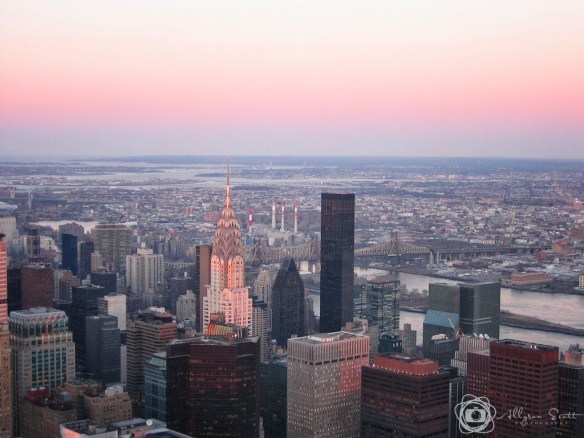 I wasn’t sure what to make of this place on arrival.  There were so many crowds, the buildings rose so high that sunlight didn’t reach the street, it was loud, the cab drivers were crazy…but the energy of the city and the creativity it inspired was undeniable.  I can’t wait to go back!